Sailing to or around the island of Milos

Your ideal mooring in colored waters

LANDING PLACES: The gulf of Adamas is the ideal place to cast your anchor, both for sailing and motorboats. Pollonia offers shelter to only a few boats, as the small bay is full of local boats and piers are small.
In Adamas docking is possible for some 40 boats over 30 ft., at a very convenient cost. Water (non-drinkable) and electricity are available on 29 columns. Refueling delivery service is available to quays in both Adamas and Pollonia.
A free wi-fi connection is provided in the port of Adamas, name: milosport.

Cruise ships: available waiting space for 10 buses and parking s for 2 buses at the same time for boarding and disembarkation.

While sailing around the island of Milos you will see a unique display of colored rocks and clear waters. According to sea conditions and the size of your boat, you may choose to circumnavigate the island due North or South: the landscape is beautiful anywhere. Touring boats depart from Adamas and Pollonia, sometimes from some of the South beaches.

TIDES: Generally, in the Cyclades tides are small and rarely influenced by winds and atmospheric pressure.

VISIBILITY: It is generally very good. During the summer, at times, humidity and dust in the air may reduce visibility up to 2 miles. In some rare conditions, there is morning fog.

WINDS: Frequent winds from North. The Meltemi (NNE) blows in July and August. South winds are less frequent in summertime, but strong, over 8 Beaufort, and this explains why few boats anchor South of the Island of Milos. Northwest, Southeast and Southwest winds are less frequent. You may experience strange winds near the coastline: this is due to turbulence created by the geographical characteristic of the island.

CURRENTS: They are not strong. Check well your charts while in the Kimolos strait, with many reefs and shoals!

VHF: Port Authority on channel 12 (gives weather forecast for the day after 8 a.m.). Fishermen use channel 8, other radios operate on channel 10.

DISTANCES OF MILOS TO OTHER ISLANDS (from Adamas)

RENTING A BOAT AT MILOS

Several sailing boats available with skipper. Some small boats with or without skipper. Where? Adamas, Pollonia, and South beaches. 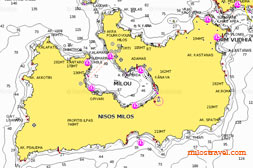 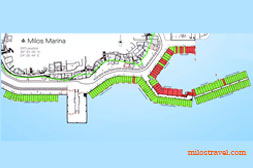 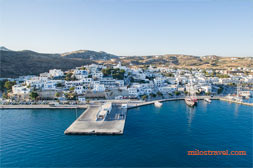 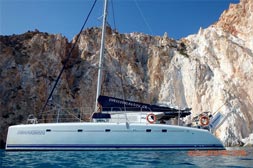 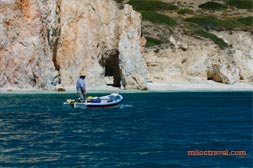 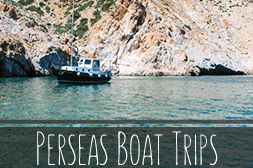